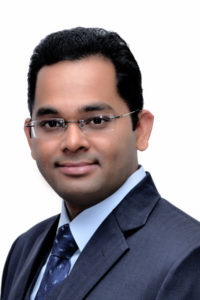 Prasant is a Scientist in TCS Research and Innovation, TATA Consultancy Services Ltd., Bangalore. His primary area of interest is computational sensing and perception (primarily in the acoustic domain) with a focus on system design for cyber-physical systems. He also has an extensive background in middleware for wireless sensor networks and low-power networked embedded systems.
Prasant has many years of experience in scientific and industrial research. He has worked in different roles and capabilities for: Keane Inc. (now a unit of NTT Data Corporation), Bangalore; CSIRO Sydney/Brisbane; Robert Bosch Centre for Cyber Physical Systems in the Indian Institute of Science, Bangalore. His external engagements include visiting fellow/researcher/visitor at: ETH Zurich, iMinds-IBCN Universiteit Gent, NICTA Sydney; and TIFR Mumbai. He has worked on a diverse range of problems pertaining to: location sensing/tracking technologies (for applications in wireless sensor networks, robotics, demining, hospital acquired infections), testbeds (for evaluating localization solutions), modeling/deployment/characterization studies (for underground mines), and middleware technology stacks (for IoT platforms); the outcomes of which have either resulted in open-source solutions or publications in premier sensornet/mobile computing/wireless forums.
Prasant scientific excellence and leadership has been recognized and felicitated by a number of honors and awards, of which it is noteworthy to mention the: MIT TR 35 – India “Top 10 Innovators under 35 in India” (published by: Massachusetts Institute of Technology and Mint-HT) in 2017, TATA Consultancy Services “Exemplary Contribution Award” in 2017, European Research Consortium on Informatics and Mathematics “Alain Bensoussan” and European Commission “Marie Skłodowska-Curie” Fellowship in 2012; and the Australian Government’s AusAID “Australian Leadership Awards” (now a stream of Australia Awards) in 2008.
Prasant has served on the organizing and technical committee of a number of international conferences/events. He represents TCS and India in many national and international standardization forums on “Smart Cities”.  He is an active speaker and thought provoker on the subject of: “IoT architecture and nuances of the last-mile”. He is a senior member of IEEE and ACM, member of the executive committee of IEEE Bangalore Section, and an Associate Technical Editor of IEEE Communication Magazine.
Prasant completed his postdoctoral fellowship from the Swedish Institute of Computer Science, Stockholm in 2013. He received his Ph.D. from the University of New South Wales, Sydney in 2012.