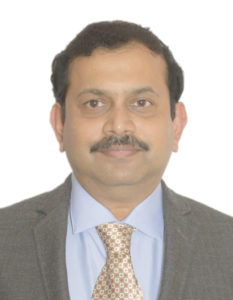 Dr. Debabrata Das is serving as Chairman of IEEE Bangalore Section. He is Professor and Hewlett Packard Chair at IIIT-Bangalore (IIIT-B). Before joining IIIT-B, he had served at G S Sanyal School of Telecommunication at IIT Kharagpur and later at Kirana Networks in New Jersey, USA. He is Principal Investigator (PI) of a project from Ministry of Electronics and Information Technology, Government of India on Green Broadband Wireless Network as well as Smart Building and IoT Internetworking from Bell-Lab Nokia Research India. He was PI of sponsored projects from Intel, Hewlett Packard, Microsoft, Motorola Research, Nokia, Govt. of India on areas of IMS and Broadband Wireless MAC/QoS/Energy-saving, TVWS. His main areas of research interest are Wireless Access Network’s MAC, QoS, Power saving. His areas of teaching interest are, Wireless Access Network, Mobile Computing with IMS, IoT and Internetworking. He has more than 95 peer reviewed papers in different Transaction/Journals and International conferences. His 7 patents are under review. He and his wireless network team had contributed three ideas to IEEE 802.16m Broadband Wireless Standard. Dr. Das received his Ph.D. degree from the Indian Institute of Technology Kharagpur.
Dr. Das is recipient of Global IEEE MGA Achievement Award 2012 and Outstanding Volunteer Award-2008 IEEE Bangalore Section.
He is also Chairman of IT-Service Management Forum India (itSMF); Board Member of IIIT-Bhubaneswar; Technical and Empower Committee member of e-Governance, Govt. of Karnataka; Board member IT Dept. Govt. of Odisha. Dr. Das was Dean-Academics and R&D of IIIT-Bangalore He is Senior Member IEEE and Fellow of Institution of Electronics & Telecommunication Engineers (IETE).