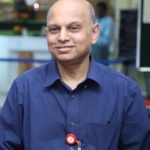 C.P. Ravikumar is the Director of Technical Talent Development at TI, India. He joined Texas Instruments (India) in 2001 and has played several roles at TI, including Senior Technologist (VLSI-Test) and Director of University Relations. He was a Professor of Electrical Engineering at IIT Delhi (1991-2001).  He has held a visiting position in the
Department of EE-Systems at University of Southern California (1995-1996) and spent a year with ControlNet India (2000-2001) as Vice President (Training).
Ravikumar obtained a Ph.D. in Computer Engineering from the Department of EE-Systems at University of Southern California (1991). He obtained an M.E. in Computer
Science from Indian Institute of Science (1987) and a B.E. in Electronics from Bangalore University (U.V.C.E.,1983). He has published over 250 research papers
in the areas of VLSI physical design, VLSI test, parallel processing, electronic design automation and embedded systems in peer-reviewed journals and conferences.  He has won three best paper awards in international conferences of the IEEE. He is the author/coauthor/editor of 15 books in the areas of VLSI design and Embedded Systems. He is a senior member of IEEE. He founded the IEEE CAS Bangalore Chapter and has served as its honorary secretary.  He has served as the honorary secretary of VLSI Society of India for 8 years. He established the VLSI Design Test and Sympoisum (VDAT) in India and was the general chair of this event for 15 years. He has served on the committees of numerous conferences in various capacities such as Program Chair and  General Chair. He has served on the editorial committees of several journals, including Journal of Electronic Testing – Theory and Applications (Springer) and Journal of Low Power Electronics (ASP). He has received an award from Zinnov foundation and a recognition from IESA for his work with Indian universities. He received the “Best Blogger” award from TI University Program (2014).